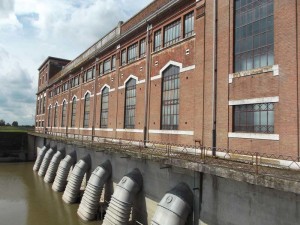 Provisional works in order to secure the building of the pumping station in Saint Siro, located in the town of San Benedetto Po (MN), damaged by the earthquakes of 20 and 29 May 2012, by structural consolidation and seismic strengthening.

The plant, which dates to the early Thirties , hosts a battery of 8 lifting pumps for lifting water and stands as  a strategic the defense of the territory against the floods of the River Secchia and the flooding of the upstream basin. The building shows a rectangular plant  (92.4 x 15 m) and has a flat roof on two levels. Two medium intensity earthquakes in May 2012 revealed damages related to construction details and building vulnerability (transverse joints causing separate structures with different stiffness against horizontal actions, insufficient connection and reinforcement of r.c. beams supporting the roof). In order not to alter the characteristics of the cultural heritage building with too invasive interventions, the design aims to achieve an overall improving of the seismic behaviour, not the adjustment, planning to relocate the strategic function of the plant; it involves these works: