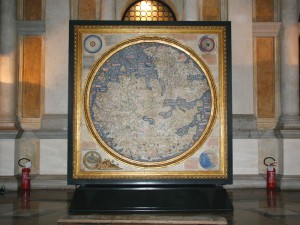 The world map of Fra ‘Mauro (dates back 1450) is considered one of the greatest late-medieval cartographic artifacts and it is preserved at the Marciana Library in Venice. The inscriptions were drawn on sheets of parchment glued on a wooden support. The circumference of the large circular hemisphere has a diameter of about 2 meters while the overall size of the square frame which hold the world map are approximately 2,3 x 2,3 meters. The study was focused on the structural aspects related to the construction of the new exhibition structure after the recent restoration work. The steel frame has been designed taking into account the seismic action as well as any accidental actions due to knocks. There was particular attention on the engagement system and its several components to avoid any tampering with the historical elements. A proper study of the mating systems has been done. It would ensure the stability of the various parts of the heritage without hindering movement or expansion typical of the timber structures. The design has considered the needs caused by the assembly, disassembly and transport since it was expected that the work could be lent to other museums for temporary exhibitions. From November 2013 to March 2014 the globe has been exhibited at the National Library of Australia (Canberra) in the exhibition “Mapping Our World: Terra Incognita to Australia” which was the masterpiece.