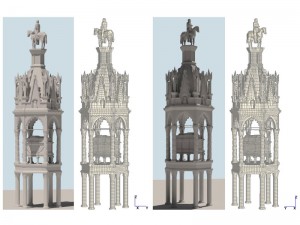 The family “Della Scala” which reigned on Verona’s city in the medieval age created a groups of Scaligera Arks that are monumental tombs of the regnants. The interventions were on two of them: on the ark of “Cansignorio Della Scala”, and on the ark of “Mastino II della Scala”.
The “Cansignorio Della Scala” ark, it dates back on about 1375 and it was designed by “Bonino da Campione” and built by craftsman from Campione. It is chronologically the latter and it is a precious demon-stration of the extreme gothic style in the Padan area. Form a constructive point of view it shows as a complex sculpture made by Candoglia marble. The structural interventions, carried out from the 2006 to 2010 concerns the improvement of the behaviour and the consolidation of the degradations and damages. The main concept was the minimum intervention with simple and localized insertion of advanced material with and high durability (stainless steel ties, titanium bushing) with the less number of drillings. Moreover the final intervention is low visible and completely removable. An important role was played also by the continuous SHM, it is active since the design phase, and still working on site. The role of this technology is manage the safety conditions of the monument with the minimum intervention on heritage, hence preserving as much as possible its significance.
The intervention on the “Mastino II della Scala” ark regards the structural consolidation of the Equestrian Statue by means of FRP.