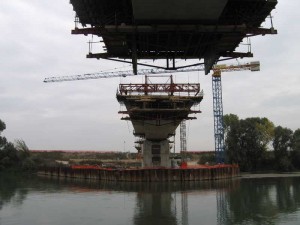 The bridge is 690 m long, with 7 spans (the three central ones are 116 m long) and is formed by a continuous box girder deck with variable height (from 6,0 m over the pier to 2,6 m in the middle section) and variable thickness of members. It was realized by the method of conjugate jointed segments, on-site cast in advance (with “Dywidag” launching facility for the piers in the river-bed and with framework based on the ground for the others) and then joined with post-tensioning system, this ensuring pre-stress against live loads, stability of cantilever crutches during construction steps and continuity of the deck. Piers are made of reinforced concrete; their shaft have height varying from 2,5 m to 18 m and box section and have deep foundations on bored piles with a diameter of 1,2 m and a length varying from 34 to 40 m. Southern abutment, with sliding bearings parallel to the deck’s axis, is based on a foundation with 11 bored piles (1,2 m diameter, 33 m long). Northern abutment, which also receives seismic actions from the entire deck, is based on a foundation with 20 bored piles (1,20 m diameter, 33 m long).