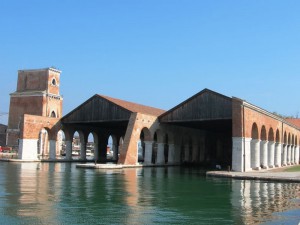 The Venice’s armory, built from 1150 to 1200, covers a very large area enclosed by walls. The structures covered by intervention are essentially buildings of “New Arsenal”, artifacts built from 1400 to 1500 around a new dock. The buildings, after years of almost total neglect, presented themselves in a very bad state of preservation and required urgent action for the safety. The buildings, named “tezoni delle galeazze”, were in fact covered shipyards for the construction of a particular type of combat ship. It is load-bearing masonry buildings with roofs made from massive wooden trusses made in ‘500. The intervention was aimed primarily at the conservation of hedges that due to the serious degradation were already partially collapsed. Other buildings, objects of intervention, are sheds said the foundry buildings consist of more recent construction with masonry walls, stone pillars and roofs made both in mixed wood-steel (i.e. Polonceau type) and industrial metal structures jointed by hot riveting. The covering structures were in poor storage conditions for the rotting of wood joined to severe oxidation of the metallic elements caused by the marine environment.