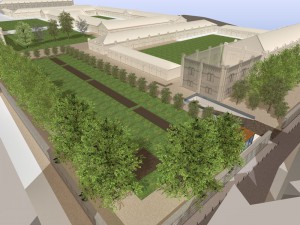 The project of underground car parking is part of the preliminary urban redevelopment project for the Ex Arsenale Asburgico area, drawn by David Chipperfield architect, and in particular the project is the construction of a three level underground car parking in the East courtyard of the historical area. The area involved by the project is defined by the external perimeter wall, dating from the historical period of the Habsburg Empire, which will be affected by surface restoration project. The underground parking, which site plan is influenced by pre-existing historical elements, is on three underground level (approximately 4.300 mq, gross measurement). Structural design especially concerns the structural project of reinforced concrete diaphragms and steel tierods realized by inclined micro piles .