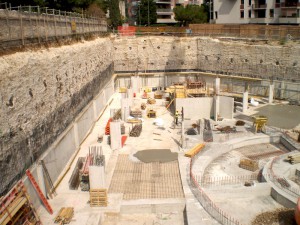 The parking is placed on a degrading slope, between De Lellis Street, The Major Hospital of Verona, and the street along the Adige riverside. The project follows the natural configuration of the soil, designing a four storey parking: two completely underground levels, one partially underground level and one in the area with the higher ground level. The total area is approximately 4300 sqm, and the parking has the capability of 400 car parks. Structural design especially concerns the structural project of a jet-grouting bulkhead to support the ground during excavation phases and the structural project of horizontal and vertical structures (reinforced concrete columns and partially prefabricated slabs and cast-in-place beams).