THEATER-AUDITORIUM IN THE OLD COOLING STATION OF THE FORMER GENERAL WAREHOUSES (VERONA, ITALY) 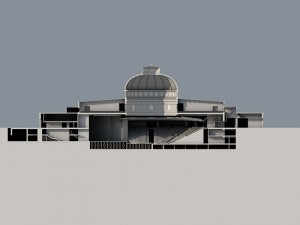 The redevelopment project of the area is based on the desire to transform the old grounds of the entire “former Warehouses” industrial complex in a space for the city and, concerning the old cooling station, proposes, first, the maintenance of the building envelope outer casing and, secondly, the construction of an underground internal structure. The proposal provides three main functions: a conference center with 6 meeting rooms, with a maximum capacity of 850 seats on the first floor, a 2.100 seat amphitheater complex and, alternatively, a 900 seats banquet hall in the basement. Structural works follow, in accordance with the intended use of the building, the criterion of maximum respect of the existing structures. The new structural system for the support of the dome, required by completion of the central hall, will accompany the existing systems and, even with the use of modern materials and construction technology, respects the original static operating principle proposing rather, for its own functioning, the peculiar characteristics related to the rotational symmetry.