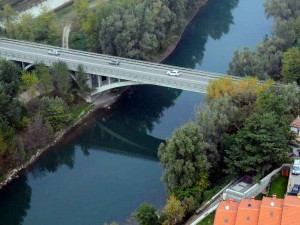 Repair, reinforcement and deck enlargement of the bridge across the Adige River near Cavaion Veronese (Italy) along main road “Napoleonica”.

The bridge consists of two bays, net light respectively equal to 60 and 25.45 meters, each consisting of a pair arches which support the portals to support the slab. The expansion of the bridge has been achieved in order to obtain a total width of the deck equal to 12.60 meters against of 8.34 meters of the initial state. This expansion has been achieved with slab leaning against the new shelves projecting from the existing structure at the portals and the stack central, and subsequently precompressed in a transverse direction to the axis of the bridge. The static adaptation was achieved by the consolidation of the reinforcement of the deck slab, of the portals and of the arches made in concrete.