BRIDGE OVER THE ADIGE RIVER IN ALBAREDO (VERONA, ITALY)

PORTFOLIO > BRIDGES AND VIADUCTS > BRIDGE OVER THE ADIGE RIVER IN ALBAREDO (VERONA, ITALY) 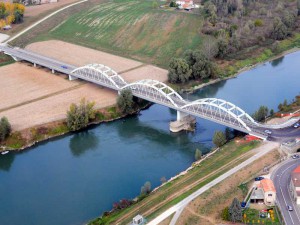 Reinforcement, static and seismic assessment, deck enlargement of the bridge across the Adige River near Albaredo d’Adige (Italy).

The bridge over the Adige river in Albaredo has an overall length of 230 m, divided into 6 spans (3 arches and 3 beams with a span of 53 m and 23 m respectively). The project involved functional, static an seismic upgrading. The functional improvement concerns the creation of new protected lanes for pedestrian and cycle traffic. The static interventions were the restoration of damaged portions of arches and the replacement with new mixed steel-concrete decks for beam spans. The static and functional adaptation of the three arch span was achieved by the introduction of new steel cross beams hanging at the existing arch, the reinforcement of existing concrete cross beams with FRP wraps, the creation of a new light concrete slab over the existing one and the application of longitudinal pre-stressing. The seismic retrofit was achieved binding together all the decks slabs and connecting them longitudinally to one abutments reinforced with micropiles. In transversal direction steel hysteretic dampers were installed above piers and abutments.